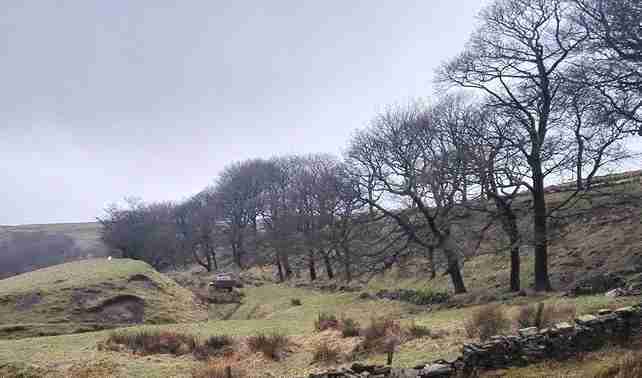 The beautiful and historic hamlet of Broadclough sits in a valley atop the East Lancashire moors, around a mile from the source of the River Irwell, which runs through the valley’s centre. On the hillside of the clough sits what has been described as ‘the most important archaeological sites in East Lancashire’, one on which there is no consensus: Broadclough Dykes.

Many of those travelling through the hamlet of Broadclough – with its stone cottages, remaining mill buildings and scattering of farms – would scarce imagine anything of significance lay within its bounds.

In fact, Broadclough was for many years at the heart of the administration of the Forest of Rossendale, being the location of the only ancient hall in the area. Broadclough Hall was owned and occupied by the forest’s constables, who were known as the Greave of the Forest of Rossendale; a quasi-hereditary position long held by the Whittaker family. The proximity of the hall to the dykes may not be accidental but rather may indicate the continued importance of the area through the ages.

The massive earthworks at Broadclough have been long associated with a famous British battle, which is well described in ancient chronicles, but whose location is a matter of debate. In 937 AD, a battle was fought between the English King Athelstan and an ensemble of the other factions from the British Isles, led by the Viking King Olaf Guthfrithson. Athelstan wanted to consolidate the new state of England, which had been largely carved out by his Grandfather Alfred, whereas the others forces were determined to either regain land or prevent the Saxons from further securing their new-made kingdom.

This battle, known as The Battle of Brunanburh was one of the biggest battles ever fought on British soil and Broadclough Dykes are said to be associated with this pivotal moment in British history.

Thomas Newbigging was the first to write at length about Broadclough Dykes in his book History Of The Forest of Rossendale, however, the association with Brunanburh may be mere conjecture due to the dyke’s location, which is near to River Brun in Burnley. This argument does have some legitimacy as the name does suggest a fortification near the River Brun.

The dykes are around one mile from Bacup, the centre of one of Lancashire’s best-preserved mill towns and sit on the hillside overlooking the River Irwell; that mighty watercourse that once powered the industrial revolution. It is perhaps the fascination with the industrial revolution, its prominence in the history of Lancashire and its enduring impact on our landscapes and townscapes, that has helped diminish the cultural significance of Lancashire’s more ancient structures.

Broadclough Dykes are approached by a small track that runs up to Dykes House Farm. The enormous entrenchment sits behind Dykes House Farm and visitors can access the trench here by hopping over a small style.

Looking down the main trench it appears the central area, which is around 15 metres wide, has been cleared away, the embankment being a continuation of the hillside on the opposite side of the dyke. This is further backed up by outcropping geology on the sides of the bank, which shows the shale bed still in situ.

Newbigging also stated that the farmer from Dykes House Farm reported the undulating and pitted land closer to the turnpike – and behind what is now Broadclough Mill – is made up of loose soil, which is of a “filled-up character”, containing fragments of sticks, bark and other substances that are not normally found in the natural deposits. He supposed this is where the soils dug out of the main dyke had been used to construct defences further down the slope.

Whilst there is no hard evidence of where the Battle of Brunanburh took place, many people now believe it took place at Bromborough on the Wirral. This would seem to make sense from a naming perspective, but also because Olaf forces were said to have arrived in a fleet of 650 ships from Ireland.

Tantalisingly though, in The History Of The Parish of Rochdale, Fishwick reports a grave at a farm near Stubbylee in Bacup, just over a mile from the dykes, which is said to be the grave of a Danish chieftain who was killed at Broadclough. And local legend has it that the battle was fought on the moors above the dykes, near an old track known as Long Dyke.

In 1974 the Bacup Natural History Society carried out a test dig on the main dyke, confirming the banking wall was natural, however, no other conclusive evidence was discovered. Furthermore, without connecting up and investigating the many features on the hillsides of this upland valley, it may be impossible to conclusively reveal the origin and history of the dykes and its related features.

Another unresolved fact is that the dykes are discontinuous across a large part of the hillside, springing up again on the same contour to the west behind Setting Barn Farm towards Dykes Barn Farm and to the east next to the old highway. It’s possible some of the dykes have been ploughed out, were never finished or were originally intersected with natural boundaries such as densely wooded areas or peat bogs.

Of course, the dykes may, in fact, have no association with Brunanburh, Vikings or Saxons, and they may have a far more ancient origin. From the nearby Tooter Hill, where a Neolithic village was located, the dykes are the most prominent feature in the landscape and even now, as visitors enter the town of Bacup from Rochdale, the dykes dominate the view from the brow-top road leading into the town. It’s now posited that the dykes are part of a chain of neolithic and Bronze Age developments covering much of the hillside around Broadclough.

Others have suggested the structures represents a cross-dyke or even a partially completed hill fort, whilst others argue it could be a Romano-British structure. But that doesn’t preclude their legendary later use and the association with the foundations of the English state.

Whatever the case, Broadclough Dykes is more spectacular than most of the better-known earthworks in Lancashire. The area is worthy of a visit and deserving of a great deal more investigation.